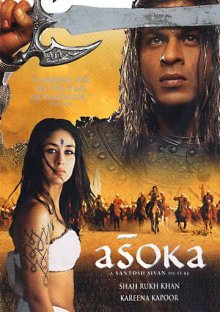 My Advice: Rent it.

Asoka (Khan) is a warrior and a damn good one. He's a prince of Magadha in the third century BCE, on the Indian subcontinent. History shows him to be the conqueror who laid down his sword and turned to Buddhism, eventually becoming responsible for spreading the belief system to the vast majority of Asia. Before he got to that point, though, this film provides a fictional background to support his conversion: due to circumstances involving a brother (Kumar) who wants him dead, Asoka must go into exile and renounce his title of prince. While living as a normal citizen, he runs into some more royalty on the lam: Princess Kaurwaki (Kapoor) and Prince Arya (Suraj Balaje) from Kalinga, who seek safety after witnessing their parents' murder. Now with Asoka (calling himself "Pawan" after his horse) in their party, it's only a matter of time before he finally wins over the heart of the princess--and sets down a path of much trouble.

For those of you unfamiliar with the basic structure of a Bollywood flick, here's your crash course: there's generally a love story (and usually a triangle of some sort); there's musical numbers; there's comedy and fighting sprinkled about almost seemingly at random; oh, and it's melodramatic to the point that your ear lobes might start bleeding. And finally, the films are generally of mini-series length--I have it on pretty good authority that a film lasting an hour and forty minutes makes Indian audiences feel cheated. It's very important that you understand this going in; audiences unfamiliar to the Bollywood style might feel completely and utterly lost.

Now, all of that being said--this is a hella picture. It manages to take all of what I've related up top and kick it up several notches. Everything, more or less, works and works well. Khan (who I'm becoming convinced is in every other Bollywood picture filmed) is rapidly proving himself to be a fine actor. In this, he can be believable both when he tells a fanciful story to the young prince and also when he's a freaking unstoppable killing machine. Kapoor makes for a great ingenue who can also wield a sword. Late in the film, when she's tying her weapon into her hand to make sure it doesn't get lost no matter what--geez, people. Bhatt is also effective, and I'll be damned if she's not Alyssa Milano's lost twin sister. Just too weird. Lastly, special points go out to Danny Denzongpa, whose character of Virat starts out as a simple recurring comic relief bit--and evolves.

The comic relief never becomes too overbearing, and Khan carries the melodramatic parts to greatness without blowing the whole thing out of control; no doubt testament to the helping hand of Sivan. Also, the musical numbers are extremely entertaining. A small quibble with the subtitles--I mean, despite the fact they were white text and easily lost against the sky in certain scenes--during songs, they would play the chorus the first time around...but not the second. Hope your memory's good.

The production values are nice enough, but when you get to the ending battle--which you learn had about six thousand extras involved--they get upgraded to downright immense. And the battle is wickedly done--there are at least a dozen moments of just winceworthy activities. I'm not talking about gore and slash-em-ups, although there is some of that; I'm talking strategic steps and oversteps by both sides. It really is an amazing battle and probably what serious war back then looked like.

The DVD has bonus features, which actually are fascinating bonuses. Apart from the standard filmographies and an above par trailer--you get what appears to be a making-of program that appeared originally on television somewhere. It's very odd, because they didn't perform any editing on it whatsoever--the commercial breaks are all still there, complete with bumper music and cards. The TV specials were obviously put together rather haphazardly: content-wise, they're jumping all over the place from characters to story to shooting and then sometimes back again in seemingly no cohesive order. There is good information to be had, just the presentation could have been cleaned up a bit. Also--the widescreen just wasn't wide enough. At the very beginning and end of the film, when text on the screen was important, I found it cut off on either side. Again--this didn't affect the viewing of the bulk of the film, it was just annoying.

All in all, this makes for a great film about war and transformation--it's well acted, well shot, and simply satisfying. I would advise tracking it down and overcoming any fear you might have of subtitles or long flicks. It's definitely worth checking out.

Buy it from Amazon!

Greetings to our visitors from the IMDB, OFCS, and Rotten Tomatoes!


Stick around and have some coffee!