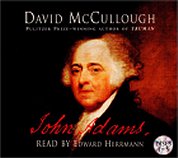 John Adams was a great many things. He was a staunch advocate of independence for the American colonies from Britain. He was the author of the constitution for Massachusette. He was the first vice-president of the United States, as well as the second president. He also a husband, a father, and a good friend to many, including Thomas Jefferson. But of course, there's plenty that went on with a man's life that people don't generally know about, especially if they attended public schools. Luckily, there's this massive biography brought to you by McCullough, a historian who apparently is not shy about loading down his books with information.

And this is the strength of this presentation. I learned a great deal about Adams that I had not known previously (see comment above), much of it patentedly fascinating. A drawback to the book is that it appears to be a bit arid in places--there's only so much in the way of stringing facts together on this scale that you can take without yawning a few times. However, there are sections that nobody could screw up. The death of Abigail, Adams' wife, and of Adams himself (it's history, so it's not like I'm blowing the ending for you here) are events that cannot help but move the listener. And there are certain sections that certainly get the blood moving and the ears perked--such as the bits regarding the movements of the Continental Congress as they tried to avoid British troops and Adams' crossing the Atlantic to serve as ambassador--ah, the fun of 18th Century sea travel.

I'd actually be interested to take a crack at the actual text, since I fear that part of the problem with this presentation that causes my detection of distinct moisture deficiencies as outlined above is the reading by Edward Herrmann. You'll notice that I didn't say Herrmann performed it--that's certainly not the case. He does a straight reading of the abridged text (with certain excised portions summed by a 'narrator') and unfortunately this makes it easy to "zone out" while listening. I found myself having to rewind and review sections because Herrmann simply put my brain to sleep. It's a shame that with such a text they didn't do something, anything, to break up the performance. Since a goodly portion of the work is taken directly from letters, having different readers tackle different "characters" from the text would have been extremely helpful. Or even a female reader to handle the letters from Abigail would have been nice. Something to work with; a single voice doing nothing but reading for nine straight compact discs can wear on the mind.

For history buffs, the book would be a no-brainer. And indeed, from what I can tell, it would be an interesting read. Unfortunately, only the hardcore history types should pick up this audiobook, for their enthusiasm and experience with the subject matter will fill in the gaps in attention that the reading leaves open.

Listen to an excerpt from Simon & Schuster Audio!

Discuss the review in the Needcoffee.com Gabfest!

Greetings to our visitors from offsite!
Stick around and have some coffee!